The BBC have just published their report on the fantastic and groundbreaking news of Philip Davies’ election to the Women and Equalities Committee and it’s exactly what you’d expect from what is now essentially a feminist-activist organisation.

In places, the article is actually quite balanced by BBC standards, though it contains outright lies and the headline alone is reason enough for serious concern. Looking at other reports, almost every media outlet uses the correct name for Davies’ new role, using its full title of “Women and Equalities Committee”. The Independent, Daily Mail, Newsweek, Bradford Telegraph and Argus, IBTimes, Sun and Guido Fawkes all went with the correct term. Meanwhile,  Total Politics and even the Guardian of all newspapers shortened the title to a still appropriate term of “Equalities Committee”. This term is still appropriate because it accurately describes the work of the committee – it’s focus is all areas of equality and the “women’s part” is merely a ridiculous and almost satirical sexist addition which hopefully Davies and his allies will one day force Parliament to remove. 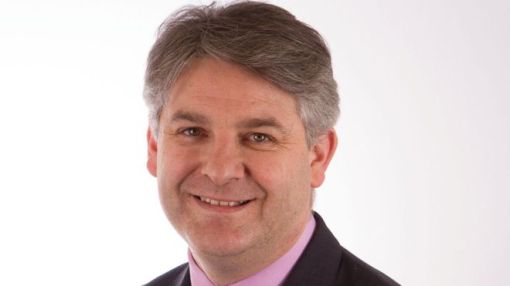 The only organisations to go for the BBC’s click-bait headline approach are tabloid left-wing outlets such as the Mirror and Huffington Post, therefore putting the BBC amongst low-calibre not to mention misandrist company. Even were it the case that 50% of the Committee’s remit was strictly women’s issues then the headline would still be unwelcome because it’s clear that Davies’ work mainly concerns equality for. Davies is by far the most successful politician in campaigning on men’s issues in the UK if not most of the world. His success is achieving historic International Men’s Day debates has no been replicated in any other democracy on the planet and by now he can be considered an expert on the gender justice gap. It’s simply common sense that such a great equalities campaigner would sit on an equalities committee, and that’s exactly how the headline should read.

The misleading headline is far from the worst part of the BBC’s article, though it’s a useful indicator that there’s something amiss and typical BBC activist behaviour in place of actual journalism. The real scandal is in fact an outright lie by the BBC concerning Davies’ speech at  ICMI 2016, a lie compounded by the misleading headline.

The BBC makes the following claim about Davies’ speech:

His claim that some women wanted to “have their cake and eat it” prompted a backlash on social media.

Davies’ “cake and eat it” quote is now famous and prompted many headlines and so any reasonable political journalist will know the basic facts on the story by now. Even if they’re ignorant of such facts the full video is available on YouTube and Davies even made a transcript of his speech available There’s absolutely no argument about what he said and simply no excuse for getting things wrong. Here’s the famous cake part in full:

I want to be very clear that I don’t believe that there is actually an issue between men and women. I think the problem is being stirred up by those who could be described as militant feminists and the politically correct males who pander to this nonsense.
It seems to me that this has led to an “equality but only when it suits agenda” that applies to
women. The drive for women to have so-called equality on all the things that suit the politically correct agenda but not on the things that don’t is of increasing concern. For example, we hear plenty about increasing the numbers of women on company boards and female representation in Parliament. However, there is a deafening silence when it comes to increasing the number of men who have custody of their children or who have careers as midwives. In fact generally there seems to be a deafening silence on all the benefits women have compared to men.
In this day and age, the feminist zealots really do want women to have their cake and eat it.
They fight for their version of equality on all the things that suit women but are very quick to point out the fact that women need special protections and treatment on other things.

So, not only is it a complete fabrication to state the Davies argued that “some women wanted to have their cake and eat it”, he didn’t even direct the accusation at all feminists, merely accusing feminist zealots of this sexist behaviour.

A 2016 survey puts the number of British women identifying as feminists at just nine percent and zealots tend to comprise only a minority proportion of any group. So, assuming two-thirds of those identifying as feminists are normal decent women who have been mislead or are yet to learn the reality of the movement, then that would leave just three percent of women left as actual feminist zealots. 3% (feminist zealots) as against 100% (women as a whole) shows the BBC have cooked the books hereby up to 33 fold. They have re-framed Davies criticism of a tiny sexist proportion of the population who subscribe to a particular ideology as an attack on women, thus flipping reality by trying to portray Davies as the sexist. In reality, he is of course the one arguing for equality.

Another interesting quote from the BBC article is the following:

Mr Davies has regularly called for more focus in the Commons on men’s issues, including suicide rates and educational under-achievement among young men and what he says is the varying treatment of male and female prisoners.

The gender justice gap really is not a disputed phenomenon amongst any rational person.  Davies outlined at least twenty separate areas of very clear discrimination against men in the justice system, all from official UK  government sources and many of which simply cannot be disputed. For example, there’s the wearing of prison uniforms by men and not women, and community components of sentences for domestic violence which are 100% exclusive to male offenders! When feminists push actual myths such as the gender pay gap the BBC don’t preface their false claims with the phrase “what she says is..”, they always accept claims of sexism against women as fact, even when they’re highly dubious or simply demonstrably false. This sexist double standard at the BBC need tackling in addition to their smears of Davies and silly headlines.

Other factual errors in the article include refering to the “Interniational Conference on Men’s Issues” an “the Justice for Men and Boys Conference”, thus giving it a less pretigious title and of course nowhere does the BBC actually mention the historic and groundbrekaing nature of Davies’ appointment of someone hapy to fight for equaity for men as well as for women for a change.

If all the above weren’t bad enough, this isn’t even the first attack on Davies by the BBC in the last week. When she wasn’t insulting brilliant film maker Cassie Jaye as “lazy”, hopeless Radio Five Live presenter Emma Barnett (a feminist) spent most of the 12 minute interview conflating women with feminism, issuing almost the exact same attack as above. She specifically raised the topic of Philip Davies in the interview, completely unprompted by Jaye and accused him of:

“blaming women and blaming feminists for the issues that men face”.

If we read Davies original quote again, he clearly blames “politically correct males” as well as “militant feminists”. He isn’t making it into a gender issue and is instead calling out an ideology and not women. His position is crystal clear, gender-inclusive and there isn’t a hint of sexism anywhere in a single word of the speech. Looking at Barnett’s Twitter feed there’s little else other than feminist nonsense and activism, thus showing once again the domination of the BBC by a group that makes up 7% of the population (and arguably more like 2% seeing as most are the zealots Davis identifies). For good measure, Barnett emphasised her misandry by scoffing at the idea of ending male premature deaths in order to increase life expectancy, despite the fact that Jaye had specifically discussed how to achive this in the interview!

It’s of note that his pattern of a smearing male politicians who dares to speak the truth on equality issues is a regular occurrence at the BBC. In fact, we’ve even had to force retractions for this exact type of misconduct at the BBC in the past when the tried the very same trick on Davies’ Conservative Party colleague Dominic Raab. The MP for Esher had written an article condemning “obnoxious feminist bigots” and the BBC’s online news quiz quite incredibly morphed this condemnation of a minority of sexist feminists into a “broadside against equal rights for women”. Readers were even invited to guess the source of this “quote” from a list of multiple choices, giving genuine sexist such as “Andy Gray and Richard keys” as options in addition to the “correct” answer of Raab, thus subtly smearing him a second time by accusation with notorious misogynists.

Finally, what with the BBC attempting to stir-up about the appointment of a superb equality activist to an equalities position and lying about his speech, it’s worth mentioning that they’re still yet to report actual news concerning Labour’s Sarah Champion, an issue we’ve previously written about. Like Davies, the feminist MP for Rotherham has an equalities role, yet while Davies was giving speeches about the gender justice gap, Champions was being exposed for having  a police caution for committing domestic violence against her ex-husband. The BBC somehow finds the time to report made-up quotes from Davies , whilst actual newsworthy crimes of domestic violence by those responsible for tackling such issues don’t get a look in, even though they’d result in the resignation of any male MP committing such an act. In fact, the BBC has at least five articles on A Tory MP who admitted to domestic violence in 2014 compared to the zero on Champion: 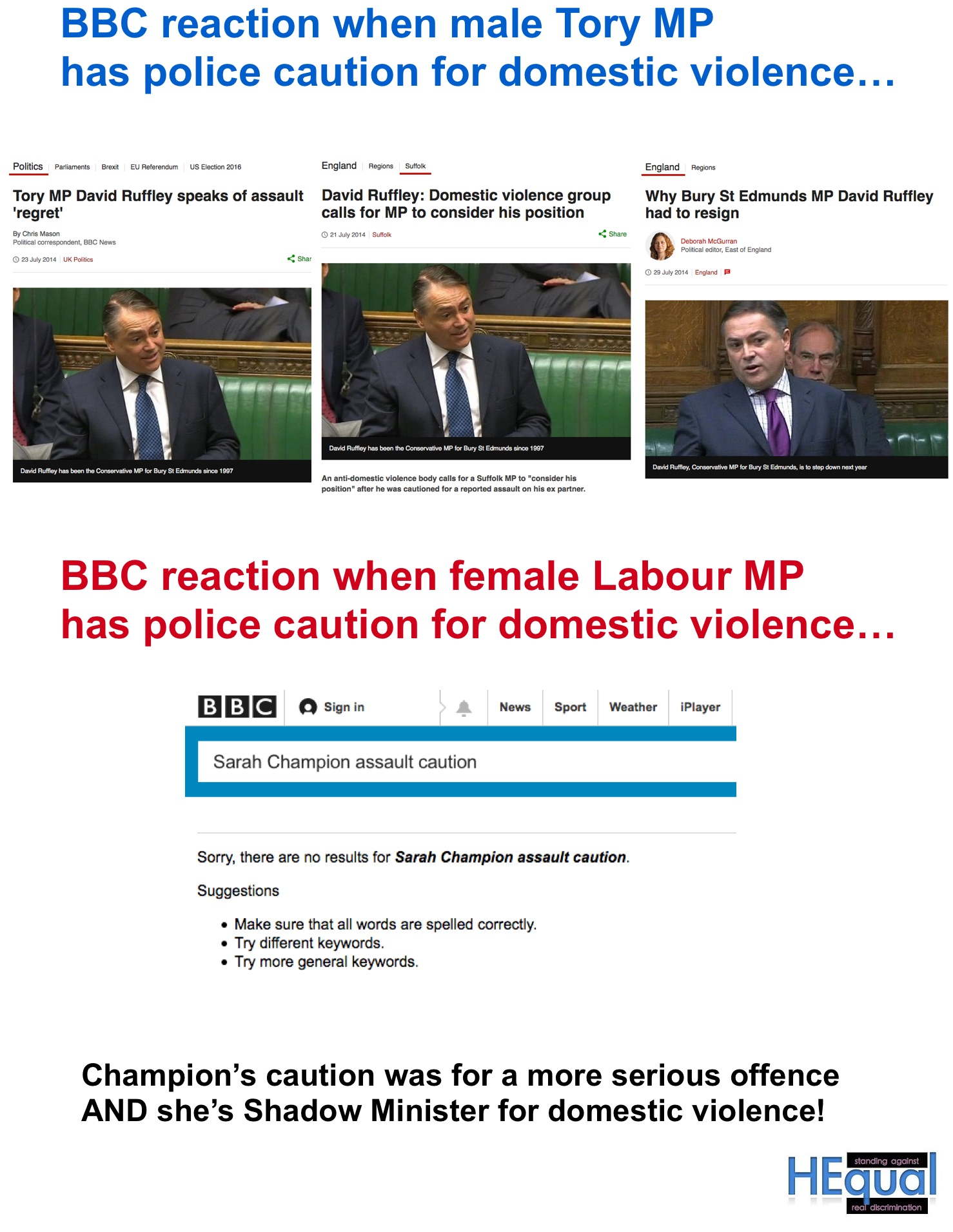 One thing the BBC does get right is the fact that Davies is “known for his robust questioning of witnesses, including regulators and BBC executives.” Given their fake-news version of Davies speech not to mention misleading headlines, it seems more such questioning is desperately needed in future.