By now you can’t have missed Cathy Newman’s car crash interview with the amazing Jordan Peterson. Newman was utterly humiliated, throughout and was made to look even more foolish than in her 2016 “interview” of Milo Yiannopoulos, after which we exposed an elected Labour Member of Parliament advocated punching Milo. Ironically, that same MP, Anna Turley,  is also the lead figure behind a proposed “social Media Malicious Communications Bill!”

Newman and Channel 4 are using the age old feminist tactic of crying “abuse” when they lose a debate,  a tactic used superbly by jess Phillips to divert attention away from her sexist and childish campaign to try to stop men’s issues being debated in Parliament. Later, in 2016 Philips again played the victim when Youtuber Sargon of Akaad said he wouldn’t rape her, and she somehow counted every retweet or reply or disagreement as examples of abuse, making an impressively nonsensical total of 5,000.

We documented Phillip’s lies in 2015 and given the complete lack of evidence cited by Newman and Channel 4 pertaining to supposed abuse, it’s worth examining this case too.

We searched Twitter for a number of violence-related keywords which included the username @cathynewman and the results were everything you’d expect:

Five relevant results, two of which refer to Newman having being “slapped down” metaphorically and another stating “You wouldn’t know journalistic integrity if it slapped you several times with a sign saying “journalistic integrity”.  The only remotely violent tweets included one suggested Newman looked like she wanted to slap Peterson and a finally one genuinely violent message from a supporter of Newman wanting her to slap Peterson

A number of tweets complaining about supposed rape threats made to Newman, but again zero evidence. In terms of comments directed at Newman/Peterson just three relevant results. One merely stated Newman had been “intellectually raped” in the interview, a further post sarcastically stated “It was disgraceful how he raped her with his man words.” and a third describe the interview as “that shit was just downright rape.” No violent or threatening messsages whatsoever, though one amusing tweet to a mild critic of Newman did note that  she “might send the cops on you for sexual assault, rape and abuse..”

Five relevant results, three of which referred to Newman being “verbally smacked around”, smacked down logically etc. Only two tweets may possibly concern physical smacking, one stating it should not happen (remind anyone of Jess Phillips there?) and another stating of the interview “The only way it could’ve been more humiliating is if he had flipped her over his knee and gave her a smack live on air.”

A number of tweets use this term, but non in a relevant violent sense other than “kill all men”. Several tweets correctly explaining the the phrase “RIP Cathy Newman” is not a threat and refers to her getting killed in the debate. Several earlier tweets also mention Newman  having been “killed in the debate” and others note that Newman had “killed feminism”. A further tweets suggest Newman is deliberately misinterpreting non-threatening tweets in exactly the same fashion she misinterpreted all Peterson’s answers.

We did find one slightly aggressive and strange tweet to Newman suggesting “Penance will be handed to you by the intelligences, until you make amends 4 lying.”, though such content is clearly incredibly tame by Twitter standards.

Most tweets related to this term correctly refer to Newman’s interview as an attempted hit piece. One tweet tells Newman “you wouldn’t recognise free speech if someone hit you with it”. We did finally found our very first remotely violent content concerning Newsman, a tweet by “Lady Cthulhu” reading as follows :

“I’m trying to rewatch the Jordan Peterson/Cathy Newman debate and I have NO idea how he kept his cool after she intentionally kept misrepresenting what he was saying. He spent half the interview correcting her about his arguments. I would’ve hit her -.- “

Most results referred to journalism being dead thanks to Newman’s interview and some to Newman having died inside during the interview. The only violent tweet was by RJonesUX, a defender of Newman, who wrote the following

The above tweet was retweeted twice and liked 4 times.

A number of tweets metaphorically liken Peterson’s humiliation of Newman to a murder due to the comprehensive nature of his victory. One suggests he should be arrested for murder, another describes it as a “snuff film” and one account questions why Newman would retweet her own murder. Two go marginally further in indicating that Newman had died as a result of the murder by Peterson, but each an every tweet is clearly sarcastic and it’s crystal clear that they’re mocking Newman and not remotely threatening or even angry.

We found the most instances of this term being used violently. One Twitter account with 8 followerrs implied that Newman was an example of the type of feminist “that should be punched in the mouth but isn’t.”

An account named “Williamjohnbird” with rather more follows stated “Never forget @cathynewman is flippin’ marvellous. That guy she interviewed was just grotesque. Must have taken huge self-control not to punch his smug face live on air. “

Finally, we caught feminist journalist “Kate Bevan” ,who has a verified Twitter account stating the following: “Standing ovation for @cathynewman who is interviewing an oceangoing dickhead on #C4News and hasn’t yet punched him”. Bevan has over 12K followers on twitter, and uniquely her tweet contained not just violence but also the sexism missing for everyone else’s tweets. 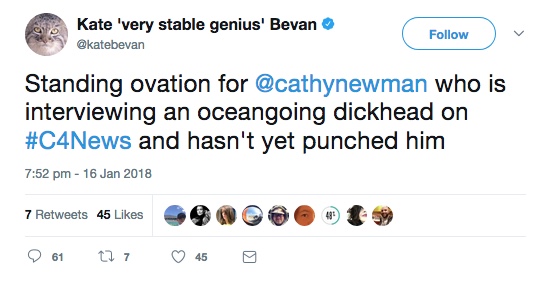 Perhaps most significantly of all, Bevan’s tweet was retweeted seven times and liked 45 times, which contrasts hugely to all the other content, most of which was not retweeted or liked by anyone. For good measure Bevan (who previously wrote for the Guardian) followed up her initial tweet with a clarification saying “I would have punched him.”, thus leaving no one in any doubt that she supported violence against Peterson for winning the debate.

So, in summary we found two slightly violent tweets directed at Newman, one by a woman who states she would have hit Newman had she been subject to the same treatment Peterson had received at her hands and another indicating that kind of action might be appropriate (but didn’t happen).

In contrast, we found one Newman supporter wanting her to slap Peterson, another individual telling her critics to “go fuck themselves” (twice) and then to “go die in a fire”. Finally we found two Newman supporters wanting Peterson to be punched, including a verified Twitter account belonging to journalist Kate Bevan. Her total of two violent tweets concerning Peterson single handedly match all the similar tweets aimed at Newman and in total they were repeated through likes/retweets a total of 52 times (note unlike Phillips, we didn’t count all the replies and their rewteets calling out Bevan’s violence).

It’s of note that none of the tweets we saw used remotely misogynistic language as claimed by Newman/Channel 4 and the only sexism combined with violence was from journalist Kate Bevan and aimed at Peterson.

Adding up all the tweets, retweets and likes we find the following totals:

Non-sexist violence aimed at Newman or her supporters: 2

Sexist violence aimed at Newman or her supporters: 0

Non-sexist violence aimed at Peterson or his supporters: 8

Sexist violence aimed at Peterson or his supporters: 55

So, as per the headline, that’s over 30 times more abuse directed at Peterson and his supporters, and of course most of it from a verified Twitter account and its followers. One has to wonder what Channel 4 will be doing about that?

If you enjoy our work, please consider making a donation. Many thanks.

Update, this post is getting a huge amount of attention online, including from Jordan Oeterdon himself. We’ve noticed people have a number of queries about our methodology so will deal with the most common questions below:

1. Why did you only search for violent terms, and not words such as “bitch”?

– The purpose of our research was to look for content directed at Peterson/Newman that could necessitate police involvement. We did this because Newman claims to have called in the police. Quite simply, it’s ok to call the police if someone threatens violence, whereas mere name calling is not a threat and so not a police matter.

2. Couldn’t the worst  tweets have been deleted by now?

– this is indeed possible, although seeing as all the above tweets were sent to Newman then all the violent tweets towards Peterson would have been spotted too. Therefore there is either still far more violent abuse directed at Peterson than Newman OR there is a double standard at Twitter and they only delete violent content directed st feminists/women and think the same abuse aimed at men is acceptable.

– Taken in isolation this could be correct, but she makes her position clear in her follow up tweet where she states she would have assaulted him.