On the morning of Friday 7 November, the BBC published an article about a rather sad case where a woman standing trial for making a false rape allegation had committed suicide. Putting aside some of the fairly biased reporting, or the fact that the BBC routinely refuses to report on false rape accusations where the accused commits suicide, the detail that really stood out in this instance was the BBC’s incredible choice of headline.

In large bold text at the top of the article (not to mention not their Twitter feed, their main news pages etc) the supposedly impartial BBC turned reality on its head and informed the licence fee paying public that the case was really all about an alleged “rape victim” 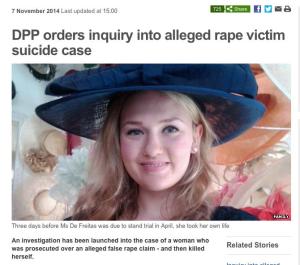 So, to hell with the accused men who’d fought against massive odds to bring the case to trial. His £200,000 basically went down the drain in an instant because someone at the BBC apparently knew all the facts. He wasn’t the victim, and instead the person on trial for criminal acts was! Not only this, but if she was an “alleged” rape victim, then the BBC is also quite clearly informing us that the gentleman concerned was therefore “allegedly” a rapist.

Unfortunately, HEqual wasn’t made aware of this sickeningly misandrist piece of “journalism” until it had been in place for almost half the day, but needless to say we weren’t going to stand for it and complained though several BBC channels pointing out their sexism and dishonesty. The BBC was given two options, either they fix the headline, or in future we’d expect all accused rapists to be described as “alleged victims of false rape allegations”. It goes without saying that we preferred the first option, though at least the second would have meant the organisation was showing constancy in its reporting.

Despite initial denials of there being any problem, we’re pleased to be able to announce victory for licence fee payers as we’ve managed to finally force the removal of the offending headline. It now uses neutral language and correctly describes the story as a “rape allegation case”. The excellent Newssniffer site captured the change.

The only downside here is that the change occurred some 36 hours after the story was published, so the vast majority of those who will read the story were exposed to the sexist and dishonest version of the article. Also of concern is the lack of support in the article for something as important actually prosecuting the vile people who make false accusations, not to mention other blatantly obvious solutions to some of the issues raised such as anonymity for the accused, or for people to stop pressuring the police into arresting innocent men. On the plus side of things, we are now starting to build up a track record of forcing media organisations into u-turns and to actually report in a more balanced and truthful fashion.

Anyway, we’re pleased to have again exposed the BBC’s blatant bias against men and victims of false accusations, and we’re particularly pleased to continue our pattern of victories against sexism. I would normally thank the BBC for eventually doing the right thing, but the article is still highly inadequate, they haven’t even apologised and even the “latest updated” timestamp on the article is wrong too, so you can’t even believe that either.

P.S. Apologies for the lack of posts recently, this isn’t the type of blog to be updated every day but we’ve not been as busy as we’d have liked with HEqual projects recently. There will of course be many more sucesses to come in future.

Update. Funnily enough, the Guaridan are using the exact same dishonest phrasing in their headline and did so before the BBC. The journalist responsible is Sandra Laville, I’ve asked her to follow the BBC’s example and I’ll update this post with the response (further update – according to Ally Fogg, it will be a Guardian sub-editor who was responsible for the dishonest headline, so probably not Sandra’s fault). Whatever the outcome it’s certainly interesting to see the BBC yet again parroting the feminist misandry of the Guardian.

Update 2. I’ve been in contact with the BBC today (11/11/14) regarding a few remaining instances of the offending headline that were elsewhere on BBC websites such as seen here. They acted on my concerns rather more swiftly this time, as a result, not a trace of the sexist wording appears anywhere on the BBC anymore. The amended version of the page now looks like this. As expected, we haven’t had any response from the Guardian reader’s editor yet.